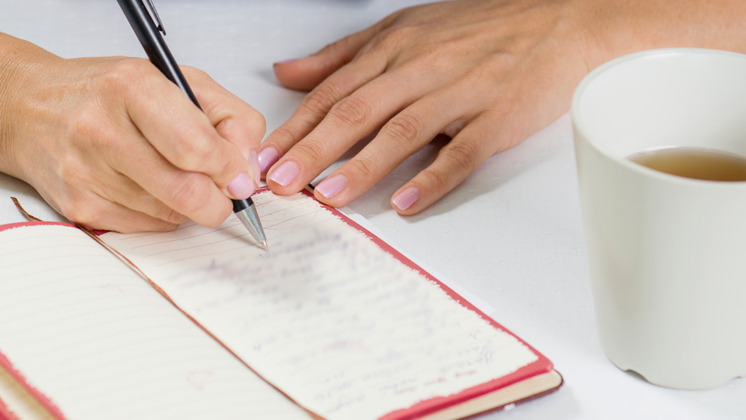 I am a member of a society that I wish was not so exclusive. I call it the sisterhood of the thank you notes.

“I very much believe in the thank you note,” Jenna Bush Hager says in a video from Southern Living, where she is an editor at large. “At work” — meaning The Today Show — “we write thank you notes for anything that they (staffers) do for us and we love it. They love it, so we love it.”

Of course, there’s also a brotherhood of men who write thank you notes. One of its most famous members was the late George. H. W. Bush, the former U.S. president and (probably not incidentally given her passion for thank you notes) Jenna’s grandfather. He built bridges around the world with his notes.

He knew how powerful a good thank you note could be.

“I am a strong believer in thank you notes,” says Lisa Birnbach, co-author of True Prep, The Official Preppy Handbook and host of the delightful weekly podcast, Five Things with Lisa Birnbach.

“I know this makes me a dinosaur, but I’m a polite dinosaur.”

Researchers have proof that writing thank you notes is a good thing to do. A study by two University of Chicago business professors, published last year in Psychological Science, found that people routinely underestimate the positive impact of expressing gratitude.

I got in the habit of writing thank you notes as a child, prompted by my mother. It’s probably no accident that she gave me a vintage etiquette book when I was 15. She wanted me to absorb those lessons.

It worked. As a grown up, I make it a practice to have stamps, note paper and cards readily available. I simply don’t agree that an email or a text will suffice. And don’t say you don’t have time. It can take as little as five minutes.

Here, from our society members, are seven reasons it’s time for you to pick up a pen and thank someone.

1. Somebody did something for you

“I assume that anyone who gave me a present spent a few minutes at least thinking about what I would like,” Birnbach says. “He or she went to some effort to buy it, mail it, drop it off, or even take the coat off her back.  (That happened once!)”

Really, it’s that simple: A gesture earns a gesture in return. Socially, if someone invites you to their home, and it’s not a potluck, write a note. If someone takes you to dinner, and pays, write a note.

And obviously, if someone gives you a gift of any value, write a note.

2. The recipient will be thrilled

Princess Diana was known as a meticulous writer of thank you notes. Her biographers say she sat down immediately after a dinner parties to write her letters, before she went to bed.

Supposedly, a hostess once teased her by saying her notes were so prompt, she must actually have written them ahead of time. Diana’s note to her read: “This is proof that I wrote this after dinner.”

Imagine having one of those notes now.

But, any note is precious to us.

“I treasure thank you notes (and personal letters) and anything in which the human hand is evident,” Birnbach says.

Think among your circle of friends. If you have people over for pizza and craft beer, who sends a thank you note? Have you ever gotten one from the office co-worker for whom you agreed to work a holiday?

I hope so, but I bet it’s less than likely.

You be different. You be the one who writes thank you notes. It definitely will set you apart.

4. You get to buy stationery

I have all kinds of writing material suitable for thank you notes, from beautiful engraved sheets made by Dempsey & Carroll (which is having a sale right now), to those $1 cards that I buy in bunches.

Also, people love getting cards with drawings or photos of where you live or work. I’ve got a lovely set of black and white cards showing the old New York Times Building and some photo cards showing the swan boats in Boston’s Public Garden.

These become keepsakes, and bring a bit of your place to your friend’s home.

5. To mark a major life event

My mother died Oct. 17, 2015, which was a Saturday. Two Sundays later, I spent the entire afternoon writing thank you notes to her friends who sent flowers and donated to her favorite charity.

Emotionally spent, I ran out of steam a couple of times, and was tempted to give up more than once.

But then I thought, “What if Connie gets her thank you note, and mentions it to Ruth, and I haven’t written Ruth’s?”

Hopefully, it won’t be something sad that prompts your notes, but writing them makes you appreciate the emotions that your friends took time to express.

Susan Kelley, who created the royal fashion sites What Kate Wore, What Meghan Wore, and What Kate’s Kids Wore, is a member of the thank-you-note sisterhood. And she sees a purpose for these missives of gratitude beyond personal expression.

Kelley served as a director of a non-profit organization, which routinely sent its donors form letters thanking them for contributions. But, in addition, the board members also wrote personal thank you notes.

“You would be surprised at the impact this has on people and the goodwill it generates,” Kelley says. “It definitely separated our organization from the many others that send only computer-generated letters.”

There’s also the tale of the former CEO of Campbell’s Soup who sent 30,000 thank you notes, one to each employee, and who turned the company around. Even Mark Zuckerberg of Facebook took a vow in 2014 to write a thank you note every day.

7. You’ll feel better about yourself

Kelley also views thank you notes as self-care. “Taking that little bit of time to let someone know they are appreciated also pays off handsomely for the sender of a thank you note,” she says.

“Our world can be chaotic and coarse; engaging in a basic courtesy like expressing appreciation to someone else creates an isle of calm and a sense of control akin to a mental health break.”

Birnbach agrees. “To me, it doesn’t seem like trouble to actually hand write a note of gratitude,” she says.

So, rather than a chore, think about viewing thank you notes as doing good — for the person who remembered you, and for you, as well.