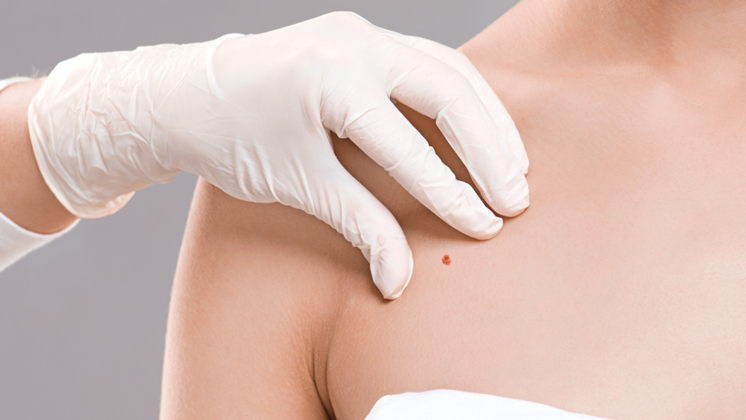 Recently, I developed a red freckle above my lip (not pictured). First I thought it was a pimple that would go away soon enough. When the red spot overstayed its welcome, I was duly aghast.

“Is there a new type of pimple that never recedes?” I thought. “Also, aren’t these things supposed to be reserved for adolescent years?“

Turns out the spot above my my lip wasn’t a zit, but rather, a cherry angioma. According to Healthline, red moles, or cherry angiomas, are common skin growths that can develop on most areas of the body. They’re also known as senile angiomas or Campbell de Morgan spots.

The low-down on cherry angiomas

Cherry angiomas get their reddish appearance due to the collection of small blood vessels inside of them. The spots may appear smooth and even with your skin, or slightly raised.

These ruby-red papules are typically 0.5–6 mm in diameter and are the most common vascular anomaly.

The reason these red moles appear isn’t known, but there may be a genetic component to cherry angiomas. Moreover, they’ve been linked to pregnancy, certain medical conditions, exposure to chemicals and climate.

Most resolutely, cherry angiomas are linked to age. They typically start to occur around age 30 and often increase in size and number as we age.

Are these red moles a cause for concern?

Cherry angiomas are typically harmless and not a cause for concern. However, if you notice a change in the mole’s appearance (i.e. it gets bigger or begins bleeding), schedule an appointment with your doctor or dermatologist.

When any type of lesion or growth changes, it’s important for your physician to examine it in order to rule out serious conditions such as skin cancer.

Otherwise, though, cherry angiomas aren’t an issue — unless you don’t like the way they look. In that case, you may be able to opt for a common mole-removing procedure to get rid of the spot. You can also try a number of natural home remedies for removing the red moles.

Or you can embrace your red freckles by repeating this mantra each morning: “Life is like a bowl of cherry angiomas. You never know what you’re gonna get.”

This is what causes eye floaters

7 things doctors wish they could tell you