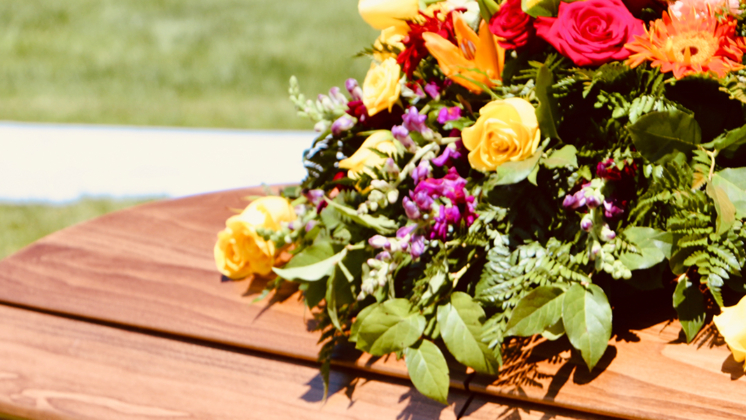 My husband’s uncle died shortly before Christmas, so along with the candle-lit tree and cozy family dinner, we said goodbye to a dear relation and friend.

Uncle Tom was a one-of-a-kind person who was enviably true to his beliefs. An activist, war-tax resister, and small town dentist, he did no small share of pro bono work in his rural Berkshires hometown.

So we weren’t entirely surprised to learn Uncle Tom’s send-off would also be unique. He had chosen a green burial.

Green, also known as natural or simple, burials are a fast-growing segment of the funeral business. While only about 5% of today’s burials are green, about 72% of cemeteries are reporting an increased demand for the practice, according to a survey from the National Funeral Directors Association (NFDA).

In the same survey, almost 54% of Americans said they would consider green burial options.

A natural return to the earth

Strictly defined, a green burial doesn’t put anything into the earth that doesn’t decompose.

That means forgoing the typical steel, concrete, copper and bronze used for coffins and vaults. Instead of a traditional coffin, a biodegradable option such as a shroud or plain pine or cardboard box is used.

Most green burials also skip embalming, which is done mainly for cosmetic reasons, and essentially dumps gallons of toxic chemicals into the earth each year.

Some natural funerals go further and try to preserve and restore the surrounding land to create a more natural environment, according to Edward Bixby, president of the Green Burial Council, a non-profit group that certifies green funeral providers.

Green burials are also becoming an alternative to cremation, which accounts for about 50% of the funeral business, says Bixby. “People often choose cremation because they think it is the only alternative to a traditional burial,” he explains.

But cremation has its own environmental hazards, including using an outsized amount of energy and potentially releasing toxins when ashes are spread.  “When people realize this they take a closer look at green burials,” says Bixby.

Natural burials have a built-in advantage over traditional ones when it comes to cost.

Your loved ones can expect to pay significantly less for a natural burial than the $8,500 median cost of a funeral, says the NFDA, due to the lack of fancy vaults and coffins as well as embalming, viewing and other funeral service fees.

The one exception is the plot itself: Real estate is real estate.

You should, however, do some legwork up front to make sure your wishes are followed.

Since green burials are still a tiny part of the business, it’s important to scout out providers and cemeteries yourself, instead of leaving the job to loved ones during a difficult time, says Bixby.

Scout out providers and cemeteries yourself, instead of leaving the job to loved ones during a difficult time.

Fortunately, because of the budding interest, an increasing number of conventional cemeteries are offering green burial areas within their parameters, charging the same or slightly lower fees for individual plots as they do for traditional burials.

You can find more information about green burials, and a list of certified providers in your area, at the Green Burial Council’s website.

A natural burial can also be an opportunity for your loved ones to create new, meaningful rituals around death.

After Uncle Tom died, two of his sons spent the holiday building his simple but elegant pine coffin. The plot, dug by green burial volunteers, was on the crest of a beautiful hill that shared space with a traditional, if remote, cemetery.

Even on a weirdly foggy winter day, we knew we were somewhere special and looked forward to a spring or summer visit when we could truly appreciate the landscape.

Death is forever. Cemeteries, as they currently exist, might not be

What should you wear to your funeral?

5 websites that help you navigate the grieving process