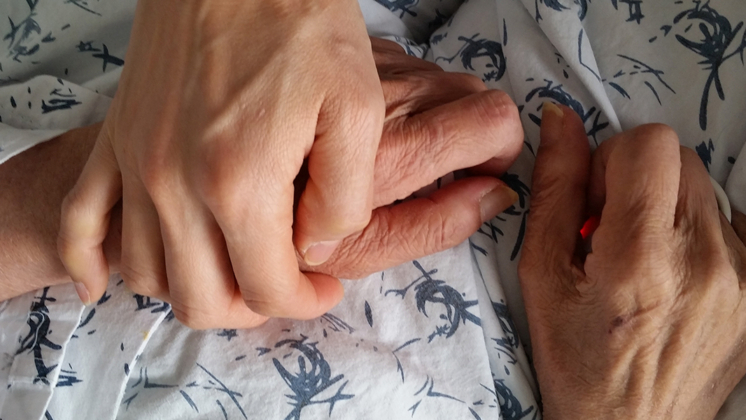 You may be familiar with birth doulas. These coaches, or “birth companions” assist pregnant women through the delivery of their child and postpartum recovery. They’re not OBGYNs, but they are highly trained in how to offer emotional and physical support and guidance to a mother.

Sound nice? Plenty of moms-to-be think so, and the doula movement has been growing steadily over the past couple of years. Now people on the other side of the life spectrum can contact doulas as well to quell fears about dying and ease their transition.

In order to decide if an end-of-life doula is right for you, it’s first important to understand what exactly they are, and what they’re not.

[Think of a doula] kind of like a firefighter. The doulas [are] willing to go out there in the crisis situations.
Deanna Cochran, founder
Quality of Life Care

First off: The preferred term is, in fact, end-of-life doula, rather than “death doula.” Death doula admittedly has an intriguingly spooky, cultish air about it, but it tends to perpetuate negative misinformation about the role, like the idea that these doulas assist in administering lethal injections. And in order to bring awareness to any movement or group, it helps to consistently use the same terms.

To find out more, Considerable spoke with Deanna Cochran, founder of Quality of Life Care and one of the founding directors of the National End-of-Life Doula Alliance.

“I’ve been doing this since 2005, before there was a death-positive movement at all,” Cochran said. “What was going on was a scattering around the world … I found them when I began blogging in 2006 as a private end-of-life doula.

“I thought I was going to cause a scene doing what I was doing … I wanted everyone to know that you can have this medicine, these treatments, this therapy long before you’re sent to hospice. Nobody wants to admit they’re dying, but then people have miserable experiences dying because they’re not getting palliative care.”

So what exactly is an end-of-life doula, and how are they different from, say, a hospice nurse or in-home caregiver?

Cochran described an end-of-life doula as “a person who accompanies another through dying and death — holistic, nonmedical, practical support.”

Doulas don’t exist separately from hospice care. In many cases, end-of-life doulas work in conjunction with hospices to provide an overarching holistic experience.

“End-of-life doulas accompany hospice,” Cochran explained. “Hospice is fantastic, but the problem is they don’t have the kind of time that might be needed. Nurses can’t stay with a patient for hours and hours — sometimes the hospice would like more support for the patient but the hospice doesn’t always have the volunteers available.”

“[Think of a doula] kind of like a firefighter; the doulas understand that you never know when vigils or a high-need situation is going to happen, and they’re willing to go out there in the crisis situations. Hospice volunteers are not expected to tend to crises; they’ve planned their volunteer schedule. The doula team is that kind of team within hospice.

In many ways, doulas act as a bridge between the other care services end-of-life patients will receive.

“Information gets lost between nursing home, hospital, and rehab. Medications get lost along the way, people aren’t getting informed, so a doula can make sure everyone’s informed all along the way,” Cochran said. “At death the [hospice care] team is gone; bereavement is a new team. But a doula is entered into the system before death, during, and after, during bereavement. They offer an extra layer of support not just for the family, but for the hospice team. Extra expertise, extra training, and they know their place alongside hospice. It’s not a different agenda.”

Doulas are trained to assist both the dying patient and their loved ones through all stages of death.

Doulas are trained to assist both the dying patient and their loved ones through all stages of death, something that most hospitals and hospices don’t supply. They have to be incredibly empathetic and ready to jump in with an appropriate care response in all manner of situations.

“[Doulas] have to be OK being a witness and not a savior; a companion, not a leader. They have to come in with curiosity, not a plan. They have to be very self-aware,” Cochran told Considerable.

Death and the dying process is a sensitive, tricky subject, and some misconceptions about end-of-life doulas have arisen as a result. Doulas are often referred to as spiritual, and their approach to help and healing has spiritual elements. “Spiritual is a term that especially means vastly different things to different people, and some patients may feel concerned by that definition.

“Doulas are not trying to replace the [hospice] chaplins by providing spiritual care. Just by being present, that’s spiritually supportive,” Cochran explained.

And, especially importantly: “We are not euthanizers! There was an ugly article insinuating that death doulas ‘do the final thing’ … Absolutely not. That has nothing to do with us. We would never be responsible for the final medication in any assisted death. That’s not our role.”

Cochran also mentioned that doulas are especially important these days because the way we die has changed.

“We’re living with chronic illnesses for a long time. Modern marvels are promising to keep us alive; we’ve never died like this before, of course people are scared.”

Doulas are especially important these days because the way we die has changed.

By becoming aware of the dying process sooner, and as medical science keeps terminally ill patients alive for longer than these diseases used to allow, patients have more time to contemplate death and face the reality of what the end of their life will entail.

“In advanced illness, everyone in the care system is focusing on life, even in the face of dying,” Cochran said. “Let’s start having gentle, realistic conversations that this train isn’t going backwards. Let’s focus on excellent symptom management and care for the whole family to support you as best as possible and not traumatize you through a system that’s trying to turn you around when you’re not going to.”

To find out more about end-of-life doulas, and where to find one in your area, check out NEDA’s website.