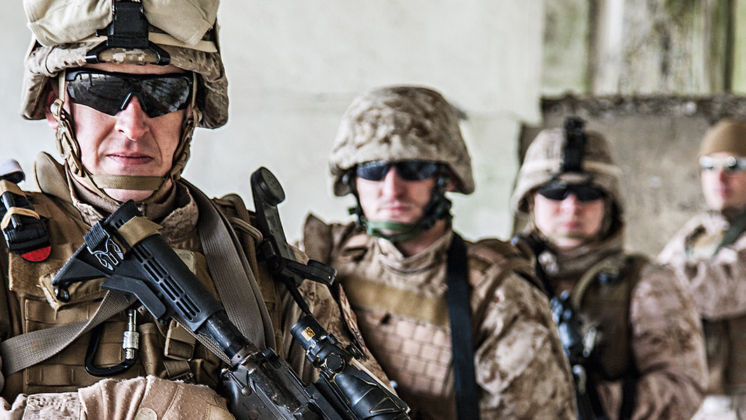 From game show hosts to hamburger royalty, these household names all served in the U.S. military before they were famous.

Before he asked contestants to “Come on down!” on The Price is Right, host Drew Carey joined on up, spending six years (1980-1986) in the U.S. Marine Corps Reserves.

Today, the Cleveland comedian still sports the buzzcut and horn-rimmed glasses he picked up in the service, and works with the USO entertaining troops.

Law & Order: SVU star Ice-T (real name Tracy Marrow) has compiled quite the resume over the years, but perhaps nothing is more surprising than his four-year stint in the U.S. Army from 1979 to 1983, which he allegedly joined to support his daughter and then-girlfriend.

Maude was a Marine? Who knew? New York-native Arthur listed bow and rifle hunting on her Corps qualification card, and served as a typist and truck driver from 1943 until 1945, when she was honorably discharged.

Bizarrely, however, the Golden Girl always denied her military stint, right up until her death in 2009 of cancer.

The next time you sink your teeth into a juicy Wendy’s cheeseburger, remember to thank the Army. That’s where the fast-food chain’s founder honed his restaurant skills, serving 2000 soldiers daily as a mess sergeant in Georgia and Germany from 1950-1953, during the Korean War.

Though Thomas passed away in 2002, Wendy’s still offers discounts to servicemen and women in his honor.

Theodor Geisel was a veteran ad man and political cartoonist when he joined the Army in 1943 to help the U.S. war effort.

As Captain and head of the Frank Capra Signal Corps animation department, he worked with Looney Tunes maestros Chuck Jones and Friz Freleng to create training and propaganda films for American soldiers.

When 18-year-old James Marshall Hendrix was busted on stolen car charges in 1961, he was given a choice: the Army or prison. Eleven months later, after his behavior problems were deemed “untreatable by hospitalization or counseling,” the guitar god with “little regard for regulations” received an honorable discharge for an ankle injury.

Just 17 when he joined the war effort in 1944, the Brooklyn native was immediately placed on the front lines, working as a U.S Army combat engineer specializing in landmine deactivation.

That battle experience, combined with his hatred of Hitler, informed much of Brooks’ comedy later on, most famously in The Producers.

“The only real way I could get even,” he says, “was to bring [Hitler] down with laughter.”

Allegedly drunk when he enlisted in 1942, the Beat icon’s boot camp superiors quickly declared him “restless and apathetic” and shuffled him off to the psych ward.

Over the next two months, he was diagnosed with a host of psychotic disorders — including schizophrenia — before finally being discharged with a suit and $225 in his pocket.