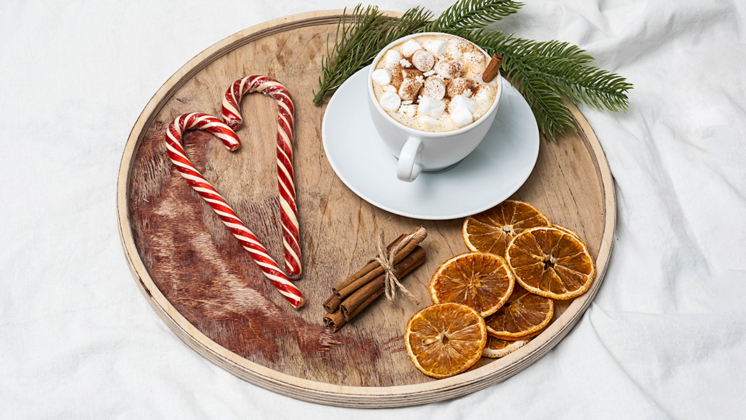 As Christmas rolls around again, you can visit any candy aisle across the country and find all things mint-flavored, particularly peppermint. It appears in many forms: candy canes, peppermint bark, mint M&M’s. Even Starbucks brings out a peppermint-flavored hot chocolate each year.

But why is peppermint so closely associated with the holiday season?

A good starting point is the Christmas classic, the candy cane. One often-repeated story says the cane-shaped candy was introduced by a choirmaster at the Cologne Cathedral in Germany. He bent the sugar-sticks into canes to resemble a shepherd’s hook. The all-white candy canes and were given to children who attended the ceremonies to keep them quiet. This became a popular tradition, and eventually the practice spread across Europe and America.

The fact-checkers at Snopes don’t buy it, nor could they find evidence for another story in which “a candymaker in Indiana stained them with red stripes to show the stripes of the scourging Jesus received.” But they did find a connection to religion.

Bob McCormack from Georgia is credited with using candy canes as special treats for Christmas for his friends and family. Initially the candy canes were made by hand and production was labor intensive.

In the 1950s, a machine was designed especially for the automation of candy cane production. It was invented by Bob’s brother-in-law — a Catholic priest named Gregory Harding Keller. Their company, Bob’s Candies, was a pioneer in the production and distribution of candy canes worldwide, and has been in business for over 80 years. (Bob’s is now part of the Ferrara Candy Company.)

The peppermint craze began with candy canes and spread from there, making its way in other candies, chocolate, desserts and even cocktails.

The flavor of mint can cut through the richer flavors associated with food eaten during the holiday season. It’s a palette cleanser of sorts. Mint leaves behind a cool sensation in the mouth and, as Christmas is associated with snow and ice, this seems to make sense as the flavor of snow.

Peppermint also works as an anti-inflammatory agent and it can relieve indigestion — quite helpful as we begin the annual Christmas binge. (Peppermint tea is often suggested as a holistic remedy to indigestion.)

Peppermint as an herb is indigenous to Europe and the Middle East. However, 75% of peppermint is currently produced in the United States. Pass the mint M&M’s!