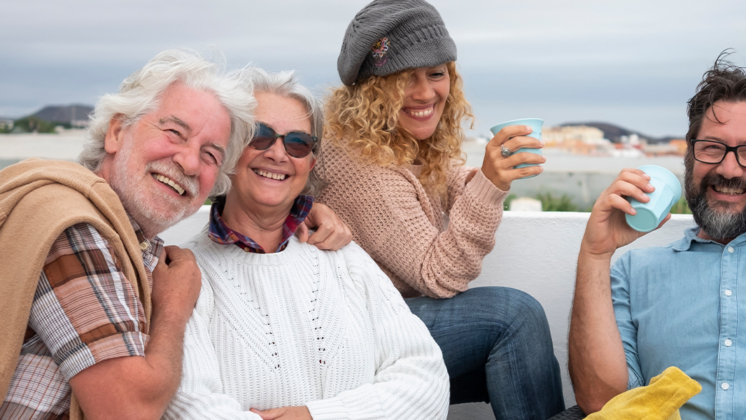 And unlike dealing with a friend who’s toxic, you can’t exactly just cut them off. (Well, you can, but not without paying a hefty price.)

Jennifer Freed, Ph.D., a licensed marriage and family therapist in California, says that most problems arise from an in-law who doesn’t exude maturity. That means that you have to be the adult — with a lot of understanding and a great sense of humor. Easy? Not at all. But you can do it.

Your DIL shows up unannounced at your house, grandkids in tow, because “the kids really wanted to see you right now.” (And she stays even if it’s clear that you’re busy.)  Or your SIL assumes you’ll watch the kids before he even asks. Boundary issues, anyone?

What drives the behavior: Like exuberant puppies, people without good boundaries are so excited about connecting with others, they aren’t always aware of needs outside their own. Underneath that enthusiasm lies anxiety to get what they want, which makes their behavior anything from incredibly annoying to downright rude.

How to respond: Acknowledge the good, then ask for what you need. Example: “We love spending time with you and the grandkids. We’re just asking that you call, ask, or inform us beforehand.”  Say it whenever necessary.

The other set of in-laws love to tell you intimate details about your daughter and their son. They also share details about their son’s business, details he probably told them in confidence. Oversharers tell others information that is inappropriate — and often embarrassing to hear.

What drives the behavior: “The oversharer has probably never felt sufficiently responded to,” says Dr. Freed, “and learned that by telling too much, he or she definitely got attention.”

How to respond:  Forget trying to change the behavior — it’s ingrained. Rather, use humor (“Here we go again!”) or change the subject. But most important, watch what you say with this kind of in-law. Don’t share what you don’t want broadcast everywhere.

You dine or vacation with your son and DIL and promptly get grilled by your other DIL She wants to know when you’ll be dining or vacationing with them. After all, it’s only fair, right?

What drives the behavior: Overly sensitive people see their world as a list of losses. They are also highly competitive with their counterparts. Though there can be five good things to every slight, they focus on the slights.

How to respond: Don’t take personally what they take personally. Accept that they are not out to deliberately hurt you, but conversely, do not rescue them. Acknowledge their feelings by saying, “We love being with both sets of our kids,” not, “Okay, when do you want to go out for dinner?” “If you treat them as if they can handle both the perceived slight and your acknowledgment of it,” says Dr. Freed, “they will get over it.” If you try to make everything even steven, you’re fueling the fire.

The other set of in-laws plans so far ahead that by the time you invite the kids for a holiday, they’re already booked up. Ditto birthdays, vacations, and special events.

What drives the behavior: For control freaks everything is about the need to feel safe and secure in an unstable world. Anything outside the realm of their control (you, your family, their adult child, the rest of the world) is very threatening.

How to respond: Forget trying to out-control a controller. It will make things worse. Rather, talk to your adult kids and say, “We totally understand your wanting to spend time with the other parents, but we’d like to spend some holidays with you too.” If the adult kids waffle, try this, “We feel lonely and marginalized when you do every holiday (birthday, whatever) with Tom’s parents.” Let them figure out how to make it work.

Every time your SIL offers to help you with something around the house, he says, “It’s gonna cost you.” Smile, smile. No favor is a favor with this kind of person; it’s a bargaining chip for when he (and maybe your daughter) need something from you.

What drives the behavior: “People who attach strings to kind deeds don’t really believe others will love them unless they have to,” says Dr. Freed. “Somewhere along the line, they learned that bribery might sustain a relationship.”

How to respond: It’s imperative to let your SIL know that your connection with him stands outside his offers to help. Tell him, “We always appreciate your help, but when there are conditions, it feels like we’re in a brokerage not a relationship.”

Then show him you care about him by making dates to get together one-on-one — invite him to a ball game, out for burgers, anything that shows him you value him for more than just what he does for you.

You and your spouse are moderates in everything you do. Somehow, however, your moderately raised child marries a person so politically or religiously fundamental that you feel constantly judged, damned, insulted, or dismissed for any beliefs that run counter to the “correct” one.

What drives the behavior: “Most humans have a core need for beliefs,” says Dr. Freed, “but for intractable thinkers, those beliefs become an antidote to the terrifying uncertainty and ambiguity of life.” Their beliefs are as essential to them as crutches to someone who breaks a leg.

How to respond: There’s absolutely no changing their beliefs, so become a master at steering the conversation to areas of common interest. Be understanding that these fundamental beliefs are a coping mechanism, not a slam against you.