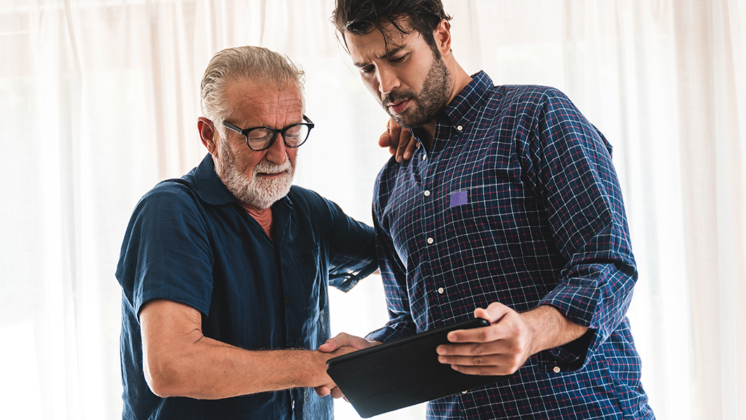 On the morning I turned 60, my 8-year-old daughter, Marta, jumped on my bed. “Mama and I forgot about your birthday, so we didn’t get you anything,” she said.

“I guess you and Mommy had a lot on your minds,” I said, playing along.

“Did we fool you?” Marta asked.

For most of my life, I woke up alone on my birthday, so I relished having a family with whom to celebrate this milestone. But the occasion also highlighted the worries I had about the 52-year-gap between my daughter and me: Will I lack the energy to meet her needs? Might she have to deal with a sickly parent, while still a child? As a teenager, will she be ashamed about having a senior citizen as a parent?

While Brenda and I were dating, she adopted Marta. The first time I saw her, she was 17 months old, sleeping in a Pack ‘n Play, her tiny body rhythmically moving with her breaths. When she awoke – her wide eyes, pug nose and chubby cheeks, punctuating a yawn – Brenda took her into her arms. This was my family.

After marrying Brenda four years ago, I adopted Marta. I had never been a parent and I was in my 50s.

As a dedicated lap swimmer, I felt younger than my biological years. But I also had an artificial hip and spinal stenosis. Last summer, waiting with Marta for her camp bus, I realized I forgot her bathing suit. Another parent agreed to watch her, and I walk-ran to our house, wary of jolting my fragile spine. I returned with the bathing suit, triumphantly handing it to Marta.

My orthopedic limitations were undetectable in the pool, where I outpaced younger swimmers. But my white hair and wrinkles gave me away. “You have an adorable granddaughter,” the cashier in the diner said, as I paid for Marta’s pancakes. “Thanks,” I said, realizing I must get used to such “compliments.”

“You have an adorable granddaughter,” the cashier said. “Thanks,” I said, realizing I must get used to such “compliments.”

Brenda, seven years younger than me, worried how our ages would impact Marta when she is a young adult. “We have to get long-term-care plans, so Marta doesn’t have to deal with it,” she said. I agreed. But I also had more-immediate concerns.

On “Math Partners” day at Marta’s school, I was acutely aware of the smooth skin and richly colored hair of my fellow class-parents. Marta must have noticed how old I looked compared with the parents of her peers.

I consulted my Uncle Richard, who had become a father in his 50s. His 21-year-old daughter, Kelsey, was growing into a well-adjusted adult. He said that fatherhood had given more meaning to his life. “It was a new adventure every night,” he told me.

Kelsey told me that as a child she was comfortable with having an older father. “It was never an issue,” she said.

Had I become a dad earlier, I probably would have seen fatherhood as a drag on my workplace ambitions. And I would have been overly anxious about meeting my child’s financial needs.

By the time I became a father, I was nearing the end of my career as a government lawyer. I had accumulated a generous pension, ensuring that I could help pay for after-school, summer camp and medical costs.

Watching Brenda for three years as a single mother successfully guide Marta through numerous developmental issues eased my angst. I knew I could rely on her judgment as a parent.

While I was single, I imagined fatherhood as an unending series of mind-numbing chores. But getting Marta to school, helping her with homework and arranging play dates gave me a sense of purpose I had previously lacked.

My newfound fulfillment played out during a family swim at our local Y. Marta wrapped her arms around my shoulders, too fearful to let go. I gently uncoupled her from me, placing her hands on the pool’s edge.

“I don’t want to,” she said, as I placed my hand under her midsection.

“I promise I won’t let you go underwater,” I said.

Marta kicked tentatively, then confidently. My self-assuredness as a father grew with every splash.

Now retired, I pick Marta up from school, help her with homework, prepare her dinner. At bedtime I sing versions of “100 Bottles of Beer on the Wall,” replacing beer with puppies in a doghouse, pumpkins in a patch or whatever I can think up.

A younger father would probably have been unable to spend so much time with her. I now realize she and I are lucky I am an older dad.

I am determined that Marta sees me as someone she seeks out for guidance and emotional support. Developing that type of relationship will depend on my willingness to listen to her concerns and aspirations, rather than on how old I am.

“Do you know why I love you?” Marta asks recently during a walk home from school.

“Because you love me, you feed me, you care for me, and you love me.”

“You and mommy are my favorite girls in the whole world,” I say.

Shortly after turning 60, I attend a birthday party for a friend I have known since summer camp. Some of my former bunkmates are there, showing me photos of their children’s weddings and college graduations. I show off photos of Marta, riding her bike and singing in her class play.

I congratulate one bunkmate on becoming a grandfather. I feel melancholy thinking about how old I will have to be to see Marta get married or become a mother — a now-rare bout of self-consciousness, which I know will quickly be subsumed by the exigencies of parenting.

That evening, while I am sleeping, Marta shakes me awake. She needs to go to the bathroom and wants me to walk her back to her bedroom.

“I’m worried about the bad guys,” she says.

“Sing the hundred song,” she says, while I tuck her into her bed.

As the monkeys continue rolling onto the floor, Marta’s breathing deepens, indicating sleep. I gently rub her back, the 52 years between us seeming less important than the connection I feel through my five fingers.