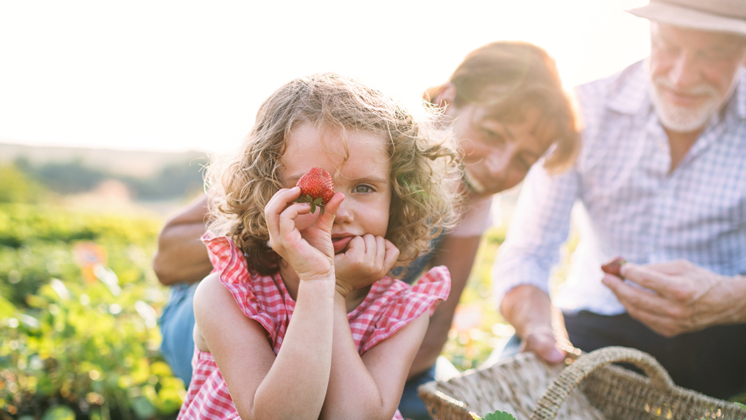 Sometimes, “Grandma” or “Grandpa” in the language of our heritage can be more meaningful than a trendy name. With grandparents serving as the bridge for children between the old family heritage and new family traditions, a name that reminds a child of where they came from can create a special bond to their ancestral homeland. Check out these 20 ways grandma and grandpa are said in other languages.

Want even more inspiration on your grandparent name? Check out The Big Book of Grandparents’ Names to see over 1,000 names in english, plus additional names in over 200 different languages. You can buy it from Amazon here.

Fact: In Greece, most grandparents will live with their children’s family for their entire lives. Younger people generally don’t move out of their parents’ home until they marry.

Fact: Next time you watch the Smurfs cartoon with your grandkids, remember that they were invented in Belgium! Pierre Culliford, a Belgian comics artist, first drew the little blue characters in 1958.

Fact: The traditional Japanese familial structure marks the eldest son as the heir to the family. This means that once his parents become too old to live alone, they will move in with their first-born son and his family to be taken care of.

Fact: Filipinos believe that eating pancit, a special kind of noodle, on your birthday will enable you to live longer. You could call it the Filipino version of a superfood!

Fact: Cambodians follow an extremely strict and traditional marriage route. Although marriages aren’t always arranged, the man must pay a dowry to the woman’s family before the ceremony and, typically, the bride is at least 10 years younger than her husband.

Fact: In Hawaiian, “ohana” means family, which includes everyone from dead ancestors and blood relatives to non-related close friends.

Fact: According to a poll conducted by the Women’s International Zionist Organization in 2012, about 25 percent of Israeli grandparents see their grandchildren more than once a week, and 20 percent see them daily.

Fact: An old Irish superstition says that when a fork falls off the family dinner table, a woman will come to visit. When a knife falls, the visitor will be a man.

Fact: Peru boasts a mixture of native (pre-Colombian) Indian and Spanish colonial traditions, resulting in a rich cultural tapestry. The country’s most famous landmark is a mountain-top citadel built during the Incan empire called Machu Picchu.

Fact: Koreans celebrate the hwan gap, a traditional 60th birthday party with lots of food and a big celebration. Turning 60 is an important passage because the lunar calendar lasts 60 years, marking the next circle to begin in one’s life. Party on!

Fact: Even your grandma wouldn’t know whether it’ll rain or snow, is a popular Russian proverb meaning nobody can predict the future. Remember to live one day at a time!

Fact: When Brazilians speak of family they generally include all extended family members on both sides. This parentela, or “kin,” will try to live close together—even in different apartments within the same building.

Fact: Similar to life in America, the common household unit in Australia consists only of the nuclear family—parents and children. Although grandparents and extended family play a role in raising children, they generally don’t live under the same roof.

Fact: Deceased ancestors play a large part in the lives of Kenyans. Most believe a person only really passes on completely when their relatives no longer remember them. Because of this limbo state, many Kenyans will name a baby after the deceased so his or her spirit can live on within the child.

Fact: Although family traditions differ across India, the idea of a joint family system is a shared value. The entire extended family often will live together under one roof—this includes grandparents, aunts, uncles, and cousins. Talk about a full house!

Fact: Typically, newlywed couples in Laos will live with the parents of the bride until their next daughter is married (if they have more daughters).

Fact: According to the Organization for Economic Cooperation and Development, the average size of French households is at 2.38 persons per house. This is lower than the global average—2.63 people.