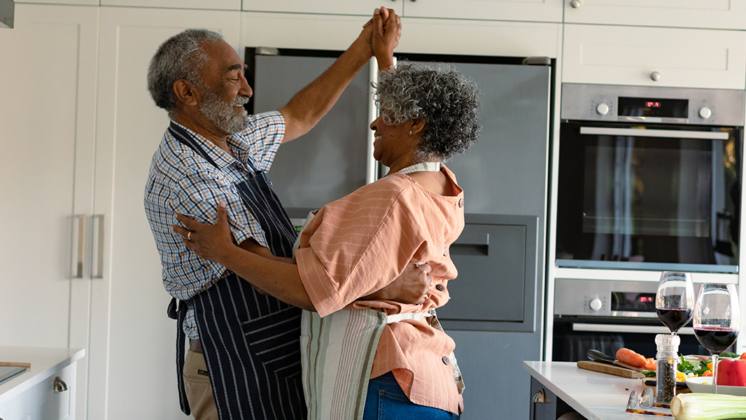 I don’t know about you, but I hate the phrase “empty nest.” The very pairing of the noun and adjective evokes loss, a sense of unfilled space nestled inside a home of twigs and branches,  all of which could be swept away in the next windstorm.

Since my husband and I live in a three-story Dutch Colonial with a dog, two full size refrigerators, and a third-floor office, I cannot call our home a nest. Nor, despite the fact that both of our children have moved out, would I call it empty.

We have a lifetime of art on our walls—from kids’ finger-paintings to college graduation photos—a vegetable garden fat with kale, tomatoes, and basil; dear friends and family nearby; and decades of vacation memories.

Still, when faced with the prospect of living alone again with my husband Frank after 25 years of married family life, I was worried.

When the hits keep coming

Life had not been gentle in the early years of our relationship.  We were happy, but we were broke.

Frank and I hadn’t lived together very long before we moved to Chicago and were married. Our daughter came along a year later. When Frank quit his book sales job and went back to grad school full time to get his MBA, we were even more broke.

And life kept coming. The month our second child, a son,  was born, my mom died of lung cancer. My days became a blur of grief, breast-pumps, and a dwindling bank account.

By the time Frank graduated, our credit cards were maxed.  There were days I didn’t go to the grocery store because there was nothing left to spend.

Nervousness and grief morphed into anxiety and panic attacks. My mother was gone, my husband was job-hunting back in New York City, and for six months I woke up sobbing every single morning.

What if keeping those plates spinning was nothing more than a trick I’d learned to manage my anxiety?

Somehow, we got through it all and settled into a happy family life that kept me busy and nurtured. I became a published novelist and an accomplished multi-tasker, someone who could spin all the plates and keep them in the air.

It worked well for a long time, but when both kids left home a couple of years ago I wondered: What if all that plate spinning was nothing more than a trick I’d learned to manage my anxiety and mask my insecurity? What if living without the kids would bring out the worst in our marriage—the stress, the silence, the doubts—instead of the best?

The silence. Have I mentioned that my husband is an introvert?

The sounds of silence

In those first months after our son went off to college, I often waited for Frank to say something—anything!—that wasn’t simply in response to something I’d said first.

When I’d waited longer than I could bear, I’d say, “For God’s sake, Frank, you’ve got to talk more!” and soon we were talking about him not talking, which for me was far better than not talking at all.

It was a start. And it broke something open for us. Soon we were talking about how to adapt our lives to the new normal of just the two of us.

“I can’t stand the tyranny of the dinner hour anymore, ” I said.

“I can’t stand the tyranny of the dinner hour anymore,” I said. “Planning, shopping, cooking, setting up, and cleaning is a lot of time for just two of us.”

Frank heard me. Now, if I don’t cook we go out or we eat something from the fridge. Frank has refreshed his cooking skills and proved up to the task of finessing leftovers.

Slowly the upside of a quiet house began to soothe me.

One of the biggest bonuses

There’s no loud music. No monitoring curfews or navigating the kids’ daily moods.

And, yes, let’s talk about sex. We have sex when we want to, which means at about three in the afternoon on a weekend when nobody is tired or distracted.

When failing knees meant we had to give up tennis, we got new bikes and took up cycling.  Frank took up Tai Chi and I, yoga.

A surprising sense of calm and Zen settled into our days, and I liked it.

Instead of leading, I learned to follow. When our son John studied in Edinburgh for his junior year, we visited. When Melissa graduated college and taught kindergarten for a year in Phnom Pen, Frank and I found ourselves on a plane to Cambodia.

For a woman who’d cowered in my suburban bathroom hiding from coffee klatches and the fluorescent lights of the grocery store, I was grateful for this sense of freedom.

I returned there the following year on my own to research and write. For a woman who’d once cowered in my suburban bathroom hiding from coffee klatches and the fluorescent lights of the grocery store, I was grateful for this sense of freedom.

Last year when my sister was hiking to the bottom of the Grand Canyon, I was able to join her in Colorado (at the last minute!) and to see her off.

As it turns out, travel—and having extra money for it—is one of the biggest bonuses of an empty nest.

Older but not stopping

Case in point: I’m writing this on the train from Florence to Pompeii.  Our kids came along for the first leg of the trip to help celebrate our thirtieth wedding anniversary, and now Frank and I are on our own in Calabria.

I’ve packed the Advil, the knee support tape, two-piece bathing suits, and the estrogen cream. We may be older but we’re not stopping, and we’re still exploring.

So, please, don’t call us empty nesters. Call us together, and loving it.

Read next: 25 ways we’re reinventing ourselves after 50