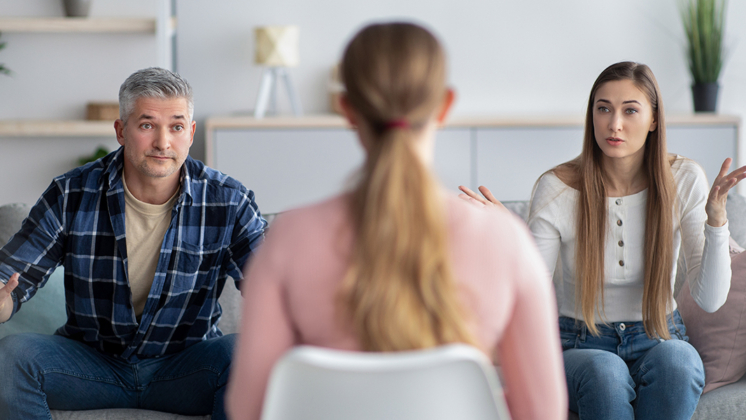 “It’s too infuriating to hold inside.” —Carmen, 73, Somerville, Mass.

“Hearing her voice messes with my head.” —Andy, 57, Knoxville, Tenn.

If you’re divorced, these comments from divorced people probably strike a familiar chord.

When you’re in the throes of a split, it’s understandable if you have some (or many) bitter feelings. But you may also feel the desire to keep things civil — if only to minimize the impact on your kids.

Regardless, especially as time goes on, you may start getting hints from your friends and family that it’s time to forgive and forget. When you’re wrestling with intense emotions, however, maintaining a good face isn’t so simple.

“Anger is like acid in a container, eating away at the person. Some people have a really deep reservoir of anger,” says Ann Gold Buscho, Ph.D., a San Rafael, Calif.-based therapist who specializes in collaborative dispute resolution.

One way to keep your anger at a simmer is to practice avoidance — after all, it’s a lot easier to like (or at least not hate) someone at a distance.

But keeping your ex out of sight isn’t always so easy. Especially if you were married for many years and have children, you’re likely to cross paths at family events — recitals, graduations, funerals. And if you live in a small town, you may not even be able to avoid running into them in the course of everyday life.

At a certain point, holding onto a ton of anger will prevent you from moving forward, says Dr. Habib Sadeghi, founder of the Be Hive of Healing (an integrative medical center) in California and author of the upcoming book, Uncoupling with Clarity.

“The whole point of divorce is to move forward into a better life. Without reconciling the emotions surrounding the divorce, the logistics of life may change once the papers are finalized, but you’re still living in the past,” Sadeghi says.

“It’s so much healthier to free yourself from this hostility,” says Buscho, who has first-hand knowledge of this situation: “My parents divorced when I was six, and I’m now 68. My 95-year-old father still refers to my mother as The Nightmare.”

Try these tactics instead:

Make a plan for in-person encounters

If you’ve got a big family event coming up, email your ex beforehand, says Buscho. “Agree how to handle it to make it comfortable for all involved — like, we’ll sit in the same row but maybe not next to each other at the wedding, or have a celebration at a neutral location rather than one person’s home.”

“Anger is like acid in a container, eating away at the person.”
Therapist Ann Gold Buscho

That strategy has worked for Eric. “I sit pretty far away and just have a minimal bit of conversation with her,” he says.

When you’re actually together in the same space, keep yourself busy so you don’t obsess over your former spouse’s every move. “Setting the table or gathering the presents to the gift table can help keep your mind off your ex,” says Sadeghi. “Engaging with everyone else as much as possible will not only help everyone have a great time, but allow you to forget for a bit that your ex is even in the same room.”

Don’t communicate through your kids

“About a year after Dave, my ex, and I separated, my daughter Emma and I went for girls’ weekend,” says Laura, 57, of Warwick, R.I., “Unbeknownst to her, I’d been working with a therapist on how to approach Dave about reconciling. The first words out of her mouth when we met were, ‘OMG, I met Dad’s new girlfriend and she’s so young!’ I was devastated — and Emma definitely saw that.”

To avoid this situation, set aside your pride and communicate with your former spouse about major life events, even if you know the info may sting. Email is fine, and your tone should be to simply share info, not ask for permission in any way.

“You don’t ever want an ex to be blindsided by kids sharing details,” says Buscho. “It should be a case of your child saying, ‘I met dad’s new girlfriend,’ and your being able to reply, ‘Yes, he told me he was going to do that….’”

If you don’t want your kids mentioning your ex, it’s OK to say so diplomatically.

Similarly, do your best to steer clear of badmouthing your ex in front of your kids, says Sadeghi. “They will see that your actions have nothing to do with loving them and everything to do with your hatred of your ex. No one likes to feel like a pawn.”

To that end, if you don’t want your kids mentioning your ex, it’s OK to say so diplomatically. “It’s not at all a bad thing to protect yourself from pain, so say something like, ‘Please don’t share those stories; they’re hard for me to hear,’” says Buscho.

At the end of the day, it’s impossible to control how your ex-spouse will behave under any circumstances, says Sadeghi. As such, learning how to control your own mindset — either on your own or with the help of a therapist — will likely offer the most value.

“Ask yourself, ‘What about me drew this person and/or situation into my life? How would I have to change for circumstances to be different next time? What is the opportunity here for me to learn?” he says. “It also helps to see your ex as just another student of life struggling to learn and grow from their experiences like everyone else.”

As Carmen says: “I understand my ex now wants his son in his life and my son wants his father in his life and missed that bond growing up. I am not going to stand in the way. I am really working on turning the other cheek, so to speak, and having them enjoy a new sense of connection.”

Despite these strategies and all good intentions, there will probably be triggers that have you slipping into a negative mindset from time to time. Do your best to remember that you once loved and respected each other, says Buscho. “Those feelings are probably still there somewhere.”

Says Sadeghi: “Life is a classroom, and divorce is a valuable lesson. Learning through relationships is how we grow. This doesn’t happen if you’re busy blaming the other person or allowing yourself to get caught up in their drama. It’s about keeping the focus on you.”

See Also: The 5 worst things to say to a friend going through a divorce