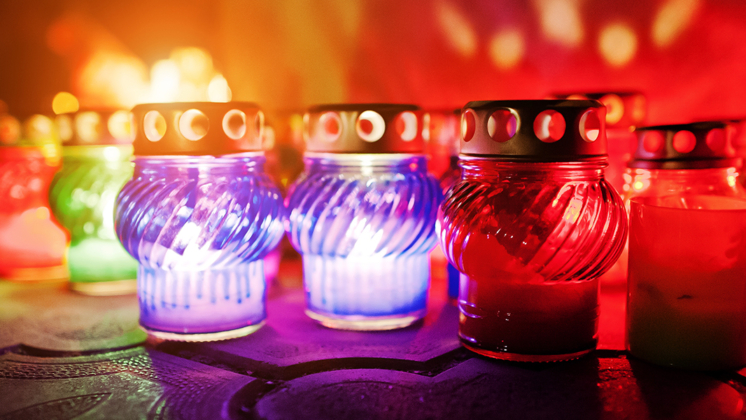 Does the idea of people weeping at your funeral make you, well, sad? Mourning a loved one is never easy, but these celebrations of life encourage finding the joy in remembering someone.

Memorial services don’t have to be solemn and black-clad; just take a look at these examples.

Muppet creator Jim Henson was no stranger to putting on a good show. His lovable puppets became fan favorites of The Ed Sullivan Show in the late ’50s and early ’60s, and starred in their own crowd-pleasing The Muppet Show from 1976 to 1981.

When he passed away, he insisted that no man or Muppet wear black to his services, held at London’s St. Paul’s Cathedral and New York’s Cathedral of St. John the Divine. Muppets like Big Bird, Elmo, and Fozzie Bear commemorated their creator with touching, celebratory, and warm performances, including Big Bird’s rendition of ‘It’s Not Easy Being Green’ as seen below.

The service came to a close with the Dirty Dozen Brass Band playing When The Saints Go Marching In.

The actress’s funeral was described as such by the British Mirror, and was just that. When Bellingham was diagnosed with cancer, she asked her husband to make sure her funeral was a lively send-off, featuring performances from many of her musical friends.

“It’ll be loud and bright and joyous. That’s the kind of girl she was. It’s one last show before the curtain goes down,” her friend and actor Christopher Briggins told the Mirror before the event.

The service was described as a royal variety show-style event, and with its star-studded attendance and performances, was one of the hottest tickets in town.

The Sex Pistols’ manager was never going to go out quietly. The punk impresario arranged for a horse-drawn hearse to carry his coffin, spray painted with, “Too fast to live, too young to die,” near bondage and music t-shirt shops in North London.

The 200-some funeral goers followed the carriage and hung out of windows, singing Sid Vicious’ version of the Frank Sinatra song My Way.

“The whole thing was always public with Malcolm,” McLaren’s stepson Ben Westwood said. “He shouldn’t have a quiet funeral. He was never a quiet man. That idea of private family grief, he hated all that stuff.”

At the service itself, members of the Sex Pistols, New York Dolls, Primal Scream, and others performed.

The actress and author planned a cremation and party for herself after a six-year battle with breast cancer (which she largely kept a secret). Collins didn’t want a funeral at all, but arranged for a party to be thrown in Beverly Hills for her star-studded friend group, including, of course, her famous sister Joan.

“I’ve written five books since the diagnosis, I’ve lived my life, I’ve traveled all over the world, I have not turned down book tours, and no one has ever known until now, when I feel as though I should come out with it,” Collins said when she revealed her diagnosis to People magazine. “I did it my way, as Frank Sinatra would say.”

The author had one very specific request for his final moment on earth: to be blasted from a canon. When he passed away in 2005, his friend, actor Johnny Depp (who played Thompson in Fear and Loathing in Las Vegas) fronted the $3 million to make it happen.

“All I’m doing is trying to make sure his last wish comes true. I just want to send my pal out the way he wants to go out,” Depp told The Associated Press.

The cannon was rigged to a 153-foot tower on Thompson’s Colorado property, and the song Spirit in the Sky blasted over loudspeakers as his ashes were shot from the cannon. Fireworks and plenty of whiskey followed, other requests laid out by the writer.

While rigging a cannon to blast your ashes into the sky might be a bit more extravagant than many people can spring for, parties or celebrations of life have become and increasingly popular way to memorialize the deceased.

If you want to go out with one last hurrah, you’re certainly not alone, and your guests will likely appreciate the chance to toast your ghost.