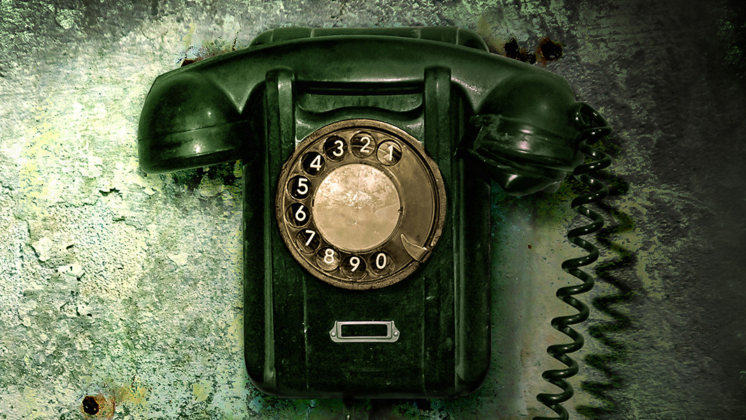 Two years ago when my family moved from Massachusetts to Pennsylvania, I went cell phone only. Gone were three landlines — home, work, and fax. My smartphone replaced the home and work lines just fine, and for the rare times I need to send a fax I use an online service.

Apparently, I’m part of a growing trend. A National Health Interview Survey reports that 53.3% of adults had wireless service only as of December 2017.

Still, that means a lot of us are hanging onto our landline phones.

And the older we are, the more likely we are to keep that home phone — almost 60% of people age 45 and older have a landline, according to the same report.

A feature story in The Atlantic last year explored how the loss of the landline was changing childhood and family life. “When making a call to another household’s landline, you never knew who would pick up,” writes Julia Cho. “For those of us who grew up with a shared family phone, calling friends usually meant first speaking with their parents, and answering calls meant speaking with any number of our parents’ acquaintances on a regular basis. … Beyond developing conversational skills, the family phone asked its users to be patient and participate in one another’s lives.”

If you’re not ready to give up your landline, you might be onto something. Here are eight reasons you might not want to cut that cord just yet.

1. It’s a connection to your past

That’s part of the reason Samuella Becker hangs onto her phone: “I have had the same landline phone number since moving to New York City from Ohio after college graduation many years ago. It’s sentimental.”

2. The sound quality is better

I’ve personally found my calls come through clearly on my smart phone. But quality can vary based on where you live and what kind of service you have. And even among landlines, service can vary.

That’s because some landlines run on traditional copper lines — the ones you had as a kid, that worked even when the power went out.  Others are digital service provided via wires.

He says his brother, who lives alongside subway tracks, keeps a landline so he doesn’t have to worry about calls dropping from interference when a train goes by.

And Becker, who own a public relations and marketing business, says, “I do have a mobile phone. But my landline gives me better reception in my high-rise apartment in New York City, especially for long conversations with clients.”

3. It costs almost nothing

Depending where you live and who provides your service, your landline phone can be a cheap backup for your cell phone. Becker says she pays just $3.95 a month for her landline phone with voicemail, as part of a package that includes Internet access and TV.

4. You need it for medical devices or security systems

You might have a hearing aid, heart monitor, or home security system that works directly with your phone line.

While there’s technology that will work with newer phone systems, replacing your existing devices could be expensive.

“Maybe you had a heart monitor put in 10 years ago and you check it three times a week by holding the phone up to your chest. That’s not something you’ll replace lightly,” Feld says.

5. You send and receive faxes

I send a lot fewer faxes than I used to. But just last month my auto insurance company requested a faxed claim form following an accident.

And when I write articles for healthcare clients, doctors often request faxed copies for review. Depending on your job and industry, a landline might be convenient for faxes.

6. You need your phone to work when you lose power

A landline is plugged into a specific address, so EMTs know where you are. Wireless systems are improving, but geolocators aren’t always able to pinpoint your location, according to Feld.

8. You really just don’t see the need for a smartphone

Rhonda Rees is among the 5.8% of us who use landlines in place of, not in addition to, smart phones. “I much prefer speaking on the phone this way,” the public relations professional says.

“I am interviewed for a number of radio shows, and they insist that I use a landline,” she says. She’s not a Luddite — she also uses Skype and social media, via her computer, to communicate.

Want to install or stick with the old copper lines? That might not be up to you. “Companies are phasing out the old copper lines,” Feld says. “They are more expensive to maintain and less efficient.” He says copper lines might be supported for customers who already have them, but not available for new customers.

How Amazon’s Alexa could detect a heart attack