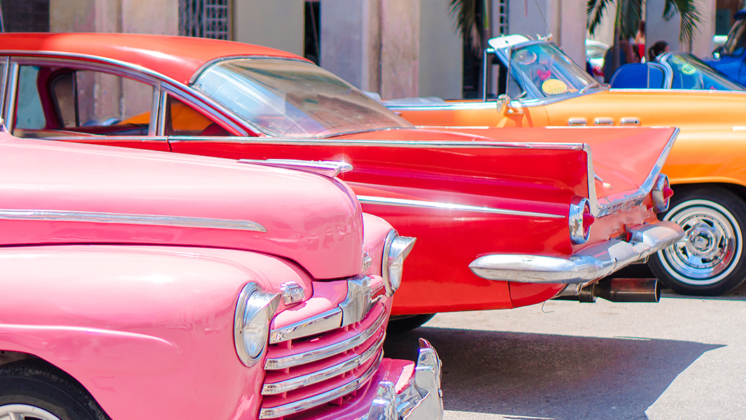 I once bought a 1968 Volkswagen Microbus from a hippie in a tie-dyed dress. As I was about to drive off, the previous owner suddenly choked up, wiped away a tear and said, “By the way, her name is Basil.”

Basil? I didn’t ask. And I was never sure why it was female. But that bus was Basil for as long as I owned it.

Cars are machines. They don’t think or have personalities or souls. But, if that’s true, why do so many drivers give their cars names?

“We share the milestones of our lives with our cars,” says David Bennett, AAA manager of repair systems. “Maybe you drive it to your wedding, or to the birth of your child. There are so many things that connect us to the cars we drive.”

A rear-view mirror for life

Cars take us to work each morning, keep us warm in the winter and maybe even thrill us when we step on the gas. In many ways our cars tell the world who we are.

So it’s not surprising that we give them names and vanity plates and fake pine tree air fresheners. We give them premium gas as a treat (it’s not) and change the oil early as a reward (don’t). Some people even owe their life to a car that protected them in a collision.

“People name their car because of the emotional connections they have with it,” Bennett says. “For the majority of people, the purchase of their first car is a rite of passage. They become akin to a parent to the car — cleaning, maintaining and repairing it.”

My son recently went through this rite of passage and bought his first car, a 2016 Mazda3. When I asked if he’d named it, he didn’t hesitate for a moment: “Cheetah,” he said. “Because it’s really quick.”

We don’t name our phones

Like the people we meet in our lives, cars often have personalities, quirks and moods that might suggest a name choice. Growing up in New England, we performed elaborate rituals to get cars to start on cold winter mornings, all the while begging it — by name, of course — to come to life.

When my brother’s car’s starter motor failed to turn over, he’d pull a 6-iron out of the trunk and give it a whack. Whether it was to show dominance or jolt it awake he never knew. All that mattered was that it worked.

But much of the unpredictability has been engineered out of cars. And along with it, we’ve lost the individuality of cars. That’s why Bernard Swiecki, from the Center for Automotive Research, thinks fewer car owners name their steeds today.

“I’m the most car-crazed person in our office,” he says. “But I’ve never named my cars.”

Maybe that’s because, as Swiecki puts it, “people now interact with a huge variety of devices and the car is just one more machine — it doesn’t have that unique identity that it used to have.”

Even though they were nameless, “there were cars I had a strong bond with,” he admits. “The first car that I had was a ’72 VW Beetle. I have a ton of fondness for that car.”

A good nickname is earned

If you’ve decided you need a name for your car but nothing comes to mind, you’re not alone.

Thousands of people search Google every month for the same thing. Among the results are a bunch of car name generators, often hosted by auto- and auto-insurance-related sites. One of them decided the name of my gray 2014 VW Jetta SportWagen TDI should be Pinky. Interesting — but I doubt it will stick.

Classic car site Hagerty invited its members to submit their car names and found that many owners are inspired by the car’s paint color. My experience bears that out. A friend of mine, driving a battered but reliable mid-’60s Chevy Nova, fondly called it Old Blue.

After my father died, I was going through his papers and found a list of all the cars he had owned. His first car was a 1923 Oakland that he named Maryanne. He liked that car so much his next one was Maryanne II.

Just like nicknames for people, car names are often a riff on the given name from the manufacturer or on a model’s peculiar styling. I had a 1962 Plymouth Fury with horizontal fins and a gaping grill that I sold to my brother. One day we started calling it The Mouth and the name remained for years.

When the right name comes along, it sticks like glue.