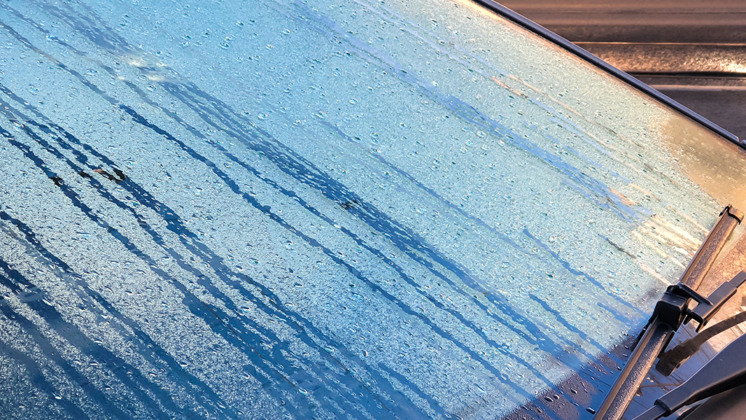 If you spend a lot of time sitting in traffic, you’ve likely noticed the pattern of little black dots framing your windows.

If you’ve never paid any mind to said dots, don’t worry — neither had I. But once I took note of their presence, I couldn’t help but wonder if they serve a purpose, or they’re simply there to make windows look fancy. And I’ll bet you’re wondering now, too.

According to the car experts at Jalopnik, the black dots on the windows of motor vehicles aren’t random at all — they’re called “frits” or “frit bands,” and they actually serve three seperate purposes.

The job of the frit is to prevent ultraviolet sun rays from warping or even making your windshield pop out during the hotter months. The black border provides temperature control as it absorbs and distributes the heat radiating onto the window, so it’s not concentrated in one area.

Next, “the frit band acts to provide a rougher surface for [the window] adhesive to stick to, and it’s a visual barrier, preventing people from seeing that nasty glue from outside,” David Tracy, a former Jeep engineer, explained to Jalopnik. Interestingly enough, the frit has existed since the 1950s and ’60s (whether you’ve noticed it or not), because that’s when car manufacturers stopped using metal trim and started using adhesives.

“Auto glass makers decided it would be easier on the eyes if the black faded instead of ending suddenly,” explains Taylor Auto Glass, “so they created a gradient with black dots.”

Besides aesthetics, though, frit dots also serve as another means of temperature control that minimizes optical distortion and, again, even out the windshield’s temperature.

According to Jalopnik, on modern cars there’s even more dots on the windshield behind the rearview mirror, which are there to keep the sun out of your eyes as you drive. So, I guess that’s four reasons. But who’s counting?

If you’re now staring at your frits and aren’t a fan of the black design, sadly there’s not much you can do. Those bad boys are baked in, in a ceramic paint that’s pretty much impossible to scrape off. But hey, at least you know they’re useful.

See Also: Opening your door with your right hand might just save a life