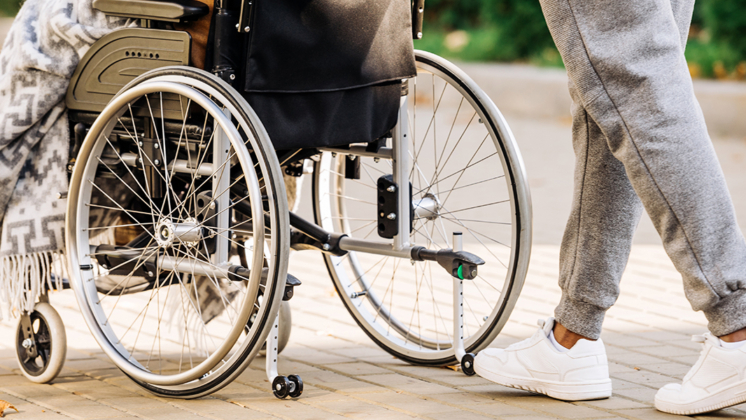 For Tony Tran, the biggest problem was the isolation and cultural pressure to keep it in the family. Barry Applebaum struggled with the stress and trying to remain stoic for his kids. Larry Bocchiere lost a sense of normalcy when he had to retire from his job.

What these men, and millions of others like them, have in common is family caregiving—providing ongoing help for an aging parent, a spouse who is ill, or both.

Although women still make up the majority of family caregivers, more and more men are stepping into the role: Some 40% of family caregivers are now men, according to the most recent research from AARP and the National Alliance for Caregiving, up from 33% a decade ago.

Like their female counterparts, these 16 million male family caregivers face tremendous challenges as they simultaneously try to balance work and raising a family with the physical and emotional demands of helping an ailing or aging loved one. But they’re also dealing with issues unique to their gender—from sometimes being less familiar and comfortable with the more personal and intimate aspects of caregiving to fighting stereotypes about the nature of their role.

That may be partly because they tend to distance themselves from the label. “Many men don’t self-identify as caregivers,” Irving says, “they just see themselves as the good husband, son or grandson.”

Here is a closer look at the experiences and challenges faced by the growing numbers of male family caregivers.

Nearly half of male family caregivers are helping an aging parent or in-law, making this by far the most common care scenario, according to the AARP study. And contrary to popular misconception, these men are not just lending an occasional hand: Some 63% of male caregivers are their loved one’s primary helper, the research shows.

Count Tony Tran, 52, among them. Tran came to San Francisco with his family from Vietnam as a child. As the only one of his six siblings who is unmarried, the bulk of caregiving has fallen to him as his mother’s dementia has worsened.

“While she’s physically healthy, she needs 24-7 supervision because she wanders,” he says.

Tran took a three-month unpaid leave from his job to care for her full time. It wasn’t long before he was physically and emotionally exhausted. Even with community support services and some help from paid caregivers, it was still a struggle. He says he thought he could do it all, but never felt he was doing enough.

“Being a caregiver can be very lonely and isolating, especially being an Asian man,” he explains.

Cultural pressures and a tradition of filial duty make the situation even more stressful. No matter how hard it is, he says, you don’t ask for help.

That’s why his new job is so important. Tran now works part-time with the Family Caregiver Alliance in the Bay area, doing outreach with their many Asian communities.

They’re handling personal care—some 44% of male family caregivers help their loved one get in and out of bed or chairs; one in three assist with getting dressed and going to the bathroom; roughy a quarter help with eating, bathing, and showering, according to the AARP report. More than half are also providing medical and nursing help, including complex tasks like wound care, injections, or tube feeding.

“Men are less likely to ask for help and may be more reluctant to accept it, if offered.”
Carol Levine
United Hospital Fund

These activities take a significant toll on any caregiver, but men often find them especially difficult.“Men are less likely to have any previous background performing these activities,” Accius says.

The research backs this up. More than half (54%) of the male caregivers in the AARP-National Alliance of Caregiving survey reported they found it difficult to help the people they are caring for with their personal, intimate needs.

Caregiving also affects men and women differently, according to Carol Levine, director of the families and health care project at the United Hospital Fund in New York.

“Men are less likely to ask for help and may be more reluctant to accept it, if offered,” she says. “They’ve been brought up to think they can do it all themselves, that asking for help is a sign of weakness.”

That seems to be particularly true when the person men are caring for is their spouse. Although just over half of male family caregivers reported they had some help from other unpaid caregivers, more than three-quarters of those caring for a spouse did not.

Barry Applebaum, 60, has experienced both kinds of caregiving—and dealt with both in different ways.

He was raising five kids in a blended family in Lancaster, Pa. while juggling a job in sales, when he first began caring for his mother, who had multiple health problems. She lived with his family for four years after his dad died.

But eventually, her physical and mental health issues became too much to deal with, and he made the tough decision to place her in a long term care facility. “It was very stressful,” he says.

After his mother’s death, Applebaum thought his caregiving days were behind him. But just a few years later, his wife suffered a major stroke at age 50.

“At first, we were under the impression she would get better, but she’s never going to be who she was,” Applebaum says.

There is the emotional and physical strain of caring for his wife: “No one thinks at age 50 your wife is going to become a quadriplegic. She needed help with everything.”

And then there is the financial strain. Huge medical bills and other costs lowered their bank account.

“Can I do this for the next 30 years, do I want to?”
Barry Applebaum
Husband, father, son, caregiver

“I changed jobs three times because I had to stay home and care for her—the insurance didn’t cover what she needed,” he says.

The two had been looking forward to becoming empty nesters, traveling and living life together. “All of our dreams were taken away from us,” he says.

Issues of spousal caregiving are totally different than caring for a parent, he says.

“My wife’s become my child,” he says. “I had to realize, I can’t rely on my kids, I can’t share with them everything I need to share. A lot of your friends eventually disappear. You’re really alone.”

His kids encouraged him to talk to someone, and he eventually found the Well Spouse Association, a group he calls lifesaving.

“For me, it was about relating to people who were in my shoes,” he says. “This is the new normal.”

Men and women also often face different challenges juggling caregiving and work. About two-thirds of male caregivers in the AARP survey were likely to work full time while caring for a loved one, compared with 55% of women. Most employed male caregivers worked 40 or more hours a week.

Unlike some European countries, there’s no national paid family leave in the United States. The Family and Medical Leave Act assures some employees time off to care for a sick parent or child without putting their job in jeopardy, but employers don’t have to pay you.

Only a handful of states—New York, California New Jersey, Rhode Island, Washington State and the District of Columbia—have a paid family leave policy. But many caregivers must use vacation and sick days, or cut back to part-time employment.  Some quit their jobs all together.

The AARP survey found, for example, that 62% of male caregivers had to make changes in their jobs to accommodate their responsibilities for their loved one, including 15% who took a leave of absence or shifted from full-to part-time work and 6% who retired early or gave up working entirely.

Larry Bocchiere falls into that last category. He chose to retire early from the U.S. Postal Service so that he could care for his late wife, who had emphysema, a progressive lung disease.

Now 67 and remarried in Bethel, Conn.,  Bocchiere looks back at his time as a caregiver.

“The first few years weren’t too bad, but as she got sicker, her activity decreased,” he says. “I had to assume a lot of household duties and eventually help her bathe and even get to the bathroom. “

“You learn how to do these things because you have to,” he says.

How was it different for him as a man?

“A man looks at a problem and tries to fix it,” he says. “It’s real easy to get frustrated when you can’t fix it. That’s what happens with a chronic illness.”

“A man looks at a problem and tries to fix it. It’s real easy to get frustrated when you can’t fix it.”
Larry Bocchiere

As her condition worsened, Bocchiere left his job, giving up one of the few things that had kept him grounded.

“We started losing touch with our friends,” he says.

There were fewer people left to lean on, “which made it really hard,” he says. He had to learn how to give injections and manage a multitude of medications.

We used to take care of each other,” he says. “Then it became like trying to spear a mammoth.”

Their town had no services for caregivers like him. Bocchiere found a spousal support group about 20 miles away and “started learning how to keep myself sane.”

What caregivers of both sexes need

The more society can acknowledge caregiving, help people get information and de-stigmatize it, the sooner people can reach out for help and support, according to Irving. “It’s better for the caregiver and better for the person they’re caring for.”

Levine, author of  several books on family caregiving, says caregivers need support, whoever and wherever they are. “I see this as a human responsibility, not a gender-related responsibility.” Her advice: