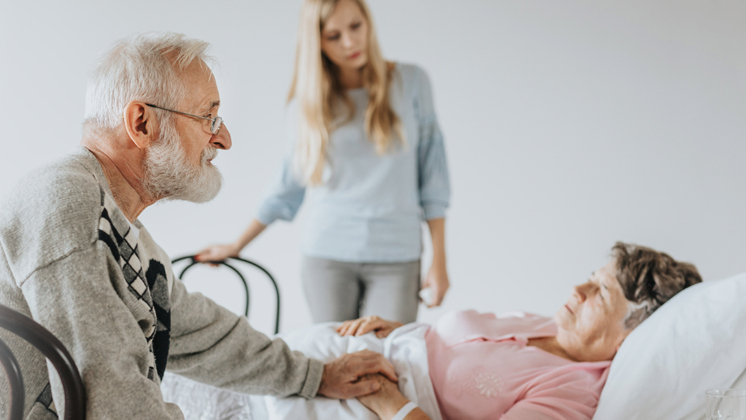 It was three years ago this month that I knew my husband’s death was imminent. His kidneys had failed. His heart was irreparably damaged. And what had been a gradual but steady decline of his health over the previous two years had picked up pace considerably.

He left our home  by ambulance for what turned out to be a multi-week stay in the hospital ICU and was then discharged to a nursing home that euphemistically had the word “rehabilitation” in its name. Nothing was being rehabilitated; he was there to await his death — even if nobody actually used the “D” word.

What I remember most about those final weeks was that I was in a state of perpetual anger — anger at the doctors who treated him aggressively long after he had lost all quality of life; anger at the insurance company for stealing huge blocks of my time that I could have spent with him instead of arguing with them; anger at the nursing home for being little more than a disgusting warehouse for the sick and elderly until their insurance ran out or they took their last breath — whichever came first.

Through it all, my teenage children and I kept vigil at my husband’s bedside every day for as many hours as we could stand the smell of humans rotting away and the disinfectants that failed to mask it. And then there was the day my husband asked the impossible of me: He asked me to bring him home to die.

I wanted to scream “no,” but instead took the cowardly way out and diverted the conversation to what flavor Jell-O he had been served that day, or why the room temperature had to be kept so broiling hot. I fooled no one, least of all my husband.

A recent New England Journal of Medicine report said that for the first time since the early 20th century, more people are dying at home than in a hospital.

After two relentless years as his family caregiver, I was physically and emotionally exhausted and unwilling to add an at-home death experience to the long list of things I still can’t unsee. But how do you say no to this request, even if it is the sanest decision you could make?

Which is probably why I found a recent New England Journal of Medicine report so shocking. It said that for the first time since the early 20th century, more people are dying at home than in a hospital. I know that increasingly, more people — 80%, according to a Stanford study — say they want to die in the comfort of their own homes, in their own beds. But even Rachelle Bernacki, director of quality initiatives at Harvard Medical School Center for Palliative Care, has said that for most Americans, “caring for their loved ones at home is not realistic.”

I have long believed that dying at home may be great for the person dying (although I’m actually not so sure of that). But without hesitation, I think it’s a life-altering experience with great potential for lasting emotional trauma for everyone else in the room.

At-home deaths aren’t like a Hallmark movie, where everyone gathers around the dying person and manages to get that final smile or hand-squeeze out of them.

Dying is a part of life, for sure, but it’s a messy part. It involves pain, loss of control, and can be hard to watch. At-home deaths aren’t like a Hallmark movie, where everyone gathers around the dying person and manages to get that final smile or hand-squeeze out of them.

Quite the contrary. The chance for a final conversation — an apology, an assurance of love, a declaration of pride — leaves the program when the pain meds kick in if not before, so you can pretty much forget that happening. Soft music isn’t playing in the background while you kneel in peaceful prayer; no, that noise you hear is more likely to be your loved one’s death rattle or the expensive machine they sent you home with to help convince you you can do this.

The reality is, caring for a loved one through a home death likely means you won’t have a trained professional at your side 24/7. You will jump out of your skin with each moan, groan and body shudder — wondering if your loved one is in pain, and if you did something wrong.

There are catheters, IV drips, and fecal waste bags to be handled; smells that will make you gag; and you may even be blessed with texts from annoying family members too busy to be there but who still insist you find the time to keep them in the loop.

Chances are you won’t sleep for consecutive days, will be afraid to leave the room to even use the toilet for fear of not being there to witness your loved one’s final breath, and your overwhelming sense will be that you don’t have a clue what you are doing. Because you likely won’t.

A home hospice or health care worker may stop by, may even leave you with some pamphlets about what to expect. They will likely give you a 24/7 hotline number to use if you have any questions, or begin to feel that your brain is about to implode and you can no longer see straight.

For some who are well-prepared, having a loved one die at home may be no big deal. It may even be a beautiful thing. But for me and family caregivers like me who changed diapers, endured patient rages, watched our wives and husbands be taken from us in small spoonfuls with no real support from the larger medical community, it was a dark abyss that I was unwilling to jump into.

Fortunately for me, my husband got it. He wound up dying in surgery a few days later. I had vigorously protested his having the procedure, but I’ve come around to thinking he saw it as his way out. He spared his family further agony with the gift of his decision. We said our goodbyes as they wheeled him into the operating room at 10:30 p.m. He never regained consciousness.

So yeah, I do understand why people say they want to die at home and offer a big hu-rah now that more of them are getting to do precisely that.

But for me? I will forever be thankful that my husband recognized my limitations and spared me the experience.