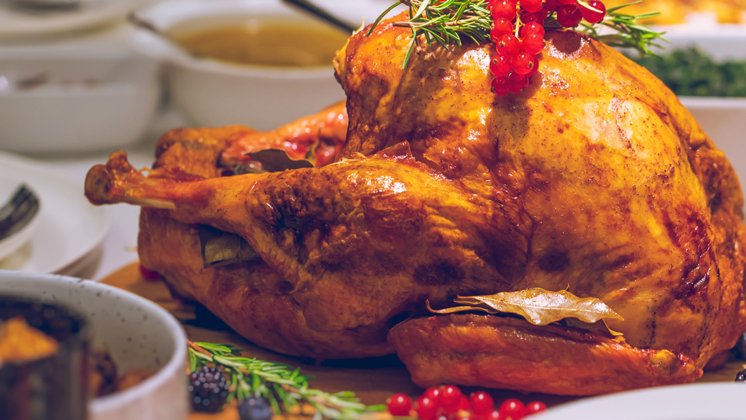 It’s time to stand up for those women of America who dare not speak their truth: Thanksgiving sucks.

We cloak our loathing for what a Romanian friend calls the National Day of Eating Too Much because—frankly, I’m not sure why. The rest of the year we have no problem serving our families indifferent deli case salads and take-out, but come the fourth Thursday in November many of us feel compelled to channel the spirit of the gray-haired grandma in Norman Rockwell’s iconic painting Freedom from Want.

You know the one I mean. Still in her apron, she’s serving what looks like a forty-pound bird with all the trimmings to a table full of sparkly-eyed family and friends, none of whom look as if they’ve lifted as much as a finger. The invisible thought bubble over grandma’s head? I  fricking should have run off to Paris with that painter.

Every other human being is given permission to evolve vis-à-vis Thanksgiving. Children look forward to putting black olives on their fingers. Five years later they’re pushing the food around their plates, anxious to get back to their video games.

But the one constant in the annual ritual? Us. The women.

College kids return home and shovel it in, happy it’s not dorm food. A few years later they graduate and get their own apartments—oh, who are we kidding?—actually, they move into the basement, and then sigh loudly when asked to help set the table.

To be fair, the Man of the House generally offers to help, but the degree of assistance varies from year to year, depending on the football match-ups that day.

The one constant in the annual ritual? Us. The women.

Oh, the days of prep

Every year around this time, regardless what’s going on in our lives, we’re expected to drop everything to assemble a multi-page shopping list and spend the better part of a week concocting a meal that, despite the splashy features in cooking magazines and websites offering “easy” ideas for A Louisiana Thanksgiving, A Mexican-Inspired Thanksgiving, A Vegetarian Thanksgiving (there would be a riot at my place), requires days of prep and every pot and pan in the house.

Not to mention the witches who think you should wash the windows and clean out the fridge as part of the prep.

Because most of the time our nearest and dearest don’t want A Mexican-Inspired Thanksgiving, they want the Damn Yams.

A dish that costs me time and money, that no one really eats, is an essential part of our family Thanksgiving experience.

I’ll explain. The Damn Yams is my mother’s recipe—an artery-clogging extravaganza made with cream, butter, eggs, and brown sugar, topped with marshmallows. It tastes like pie-filling on steroids. I dutifully make it and serve it every year.

Everyone takes a modest spoonful—so much cream! so much butter!— and the leftovers languish at the back of the fridge until New Year’s.

One year, I skipped the Damn Yams.

Everyone was like, “Where are the yams? I love the yams! I miss the yams! It’s not Thanksgiving without the yams!”

When I pointed out that no one really ate them, they said, “But it’s part of Thanksgiving!”

Let that sink in. A dish that costs me money and time, that no one really eats, is an essential part of our family Thanksgiving experience.

Surely, your family has its own Damn Yams.

It’s not just me

Perhaps you think I’m just menopausal and cranky. That other less curmudgeonly ladies delight in spending a fortune on a bland meal that involves thrusting your arm into a large slimy bird and pulling out a bag of internal organs.

That I’m just lazy (guilty as charged) and shirking my duty as commander-in-chief of The Holidays, a series of annual events put on by women for the enjoyment of children and men.

But I am not alone.

Not long ago I was diagnosed with a thyroid nodule. It was benign, but the doctor said it had to come out. I scheduled the procedure for the day before Thanksgiving.

It sounded like a book club after the third glass of Pinot Noir.

I imagined that aside from the Emergency Department, which would be full of people who’d cut themselves chopping onions, the hospital would be quiet.

Who on earth would want to have surgery the day before Thanksgiving?

Women, it turns out.

The pre-op holding area at the hospital was at capacity. Every bay was occupied by a woman being prepped for surgery. And yet, the atmosphere was festive. It sounded like a book club after the third glass of pinot noir.

Behind the curtain in the bay next to me, a woman who’d clearly already been hooked up to her IV and administered something to help her relax whooped, “The best part is, I won’t have to make that stupid gravy!”

From the rest of the conversation with her loved ones, I gathered she was there for something serious related to her colon. Yet she was in high spirits!

Ladies and Gentlemen: That is how far some of us will go to get out of Thanksgiving. We would rather literally be cut open.

If you take the day off

That year, Thanksgiving did not suck. I sat on the sofa, woozy with pain meds and thought: “I had half of my thyroid removed yesterday, but I have never felt better.”

It wasn’t the hydrocodone (okay, maybe a little), but the ease of the meal. There were fewer sides, no Damn Yams, store-bought stuffing mix (who cares, really), all assembled chaotically by everyone else.

The food was as mediocre as always, but that is unlikely to change. That was such a good Thanksgiving, it got me thinking whether I need any other odd growth or useless organ removed (is an elective appendectomy a thing?).

Although, alternatively, I could just say #timesup for Thanksgiving, and see whether everyone else will rise to the occasion.

Maybe one day. But not this year.