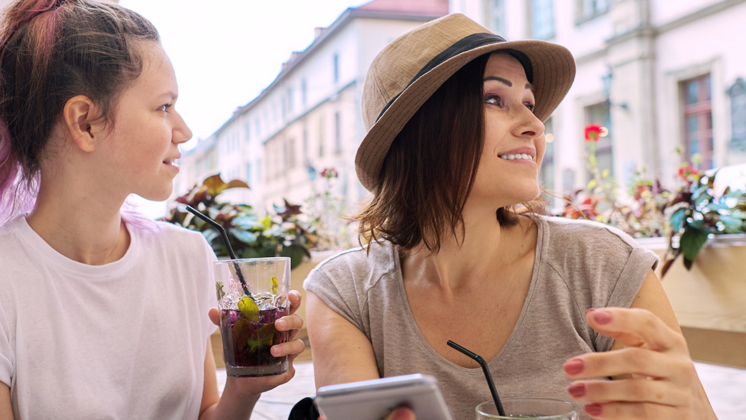 Cheating is not just for the young and restless. While overall the percent of people admitting to affairs is holding steady, in recent years those in their 50s and 60s have been straying more, while their younger counterparts are cheating less.

Today one in five adults 55 and older report having had extramarital sex at some point in their marriage, according to the General Social Survey (GSS), while only 14% of those 18 to 55 say the same.

It may start innocently. You get into a conversation with your college ex over Facebook. Or you begin flirting with a colleague at work. Then the flirting becomes more touchy, the messages more sexual. You start to fantasize about sneaking off for a night, a weekend, or even the rest of your life.

You find yourself on the brink of an affair.

Most Americans strongly value fidelity. In a May 2018 Gallup poll, 88% of respondents said that it was morally wrong for married men and women to have affairs.

Yet according to the GSS, one in six adults in committed relationships have had sex outside their union. And because people tend to underreport affairs, that figure is likely on the conservative side.

Affairs can be tantalizing and may seem worth the risk (you, of course, would never get caught).

But infidelity can also be emotionally devastating for everyone involved. Before you leap into the unknown, you want to be very, very sure this path is right for you. And think about the aftermath—because there will be one.

The key is to figure out what yearnings you’re trying to satisfy with an affair—and if sex with someone new is the best way to fulfill them. The answers to these questions will tell you that what you need to know.

1. What’s making you feel this way?

Think about the feelings that get stirred up by the other person or the mere idea of an affair. That’s valuable insight into what’s driving you toward sex outside of your relationship—and what might be missing in your life.

You might feel witty, smart, or sexy when you are flirting—a version of yourself that’s more appealing than how you act with your partner.

Ask yourself, “Who is the person that is living in my marriage?” suggests couples therapist Esther Perel, author of The State of Affairs: Rethinking Infidelity.

For instance, maybe you can’t express anger about something that’s bothering you (your sex life, you social life, and so on), and so you have shut down your feelings. To feel fully alive again, you are looking elsewhere.

Or perhaps you feel that you are always nagging your partner or being nagged, which makes you feel trapped and unhappy. It’s hard to feel sexy and spunky when nagging or nagged.

2. What’s missing in my marriage?

Feeling attracted to your heartthrob from college doesn’t necessarily mean your marriage is doomed. But it could be exposing serious problems. Do you feel overlooked or taken for granted? Has your partner become irritable or mean?

“Overwhelmingly, we hear that people have affairs because they feel hurt, neglected, or abandoned,” says Sue Johnson, a clinical psychologist and one of the founders of Emotionally Focused Therapy for couples. “They are seeking solace with another in attempt to feel lovable and wanted.”

Feeling attracted to your heartthrob from college doesn’t necessarily mean your marriage is doomed. But it could be exposing serious problems

Perhaps you’ve tried to connect more meaningfully and your partner has ignored your pleas. Before you give up, try a new approach.

You might say something like, “I am feeling so alone in this relationship, and I really want to talk about it,” says Johnson, who is also the author of Love Sense: The Revolutionary New Science of Romantic Relationships.

Opening up like this can be difficult, but it could be the start of a new way of communicating. If your partner seems perplexed, defensive, or outright hostile, it might be time to see a seasoned couples therapist.

3. Do you crave security or adventure?

In relationships it’s natural to have internal contradictions, says Perel: You want security but crave adventure; you love your spouse but desire intimacy with another.

Accepting the tensions inherent in monogamy is the best way to learn how to wrestle with them. Pushing away uncomfortable feelings often makes those feelings more powerful.

Morality aside, cheating is stressful. Sure, some people can arrange trysts and trips without an ounce of guilt. But for most, infidelity causes distress, according to Michelle Frisco, associate professor of Sociology and Demography at Penn State University.

“Our research shows that married men and women who cheat, are cheated on, or are in a relationship where both partners cheat are more likely to be psychologically distressed than married people in relationships where there is no cheating,” says Frisco.

The secrecy can put you constantly on edge—as you feel the need to guard your cell phone and monitor shared accounts. The partner who suspects being cheated upon is likely to feel threatened, anxious, and even a bit crazy.

5. Are you prepared for the consequences?

Your relationship won’t necessarily fail if you cheat. But knowing that you’re being cheated on can be the kiss of death for couples.

That’s what a team of researchers found when they explored the effects of infidelity on both married and co-habitating heterosexual partners.

The researchers analyzed data from a study that followed over 20,000 adolescents into adulthood, and found that while indiscretions did not lead the young adults to end their relationship, being the victim of an indiscretion did.

In other words, if your partner finds out about your affair, the relationship is likely to end—it’s not so much the doing, as the knowing (though clearly one leads to the other).

Get back to your feelings. If a desire for adventure is fueling your passion, could you find some other risky or challenging adventure to sub in for the affair?

What is going on at home that makes you want to flee to the arms of another? A snarky teen, a cranky live-in parent? What could you change to feel less trapped and overwhelmed?

“You own your actions, and your actions have consequences on others.”
Esther Perel
Author, The State of Affairs: Rethinking Infidelity

And then there’s the matter of what’s missing. If your relationship is important to you, it’s worth the effort to try to improve it.

If the idea of “working” on your relationship feels exhausting, consider this: Researchers have found that when people feel securely attached to their partners they are less likely to be depressed and anxious and more likely to stay focused on long-term goals.

A secure, loving partnership, as it turns out, is not just a source of satisfaction; it’s a bulwark of mental health.

If you have already had an affair and are feeling guilty or ashamed, forgive yourself. “We all make mistakes,” says Johnson. “It can be a great opportunity for learning and repair.”

But if you’re hoping to stay married, you might want to skip the Big Confession and keep your transgression to yourself.