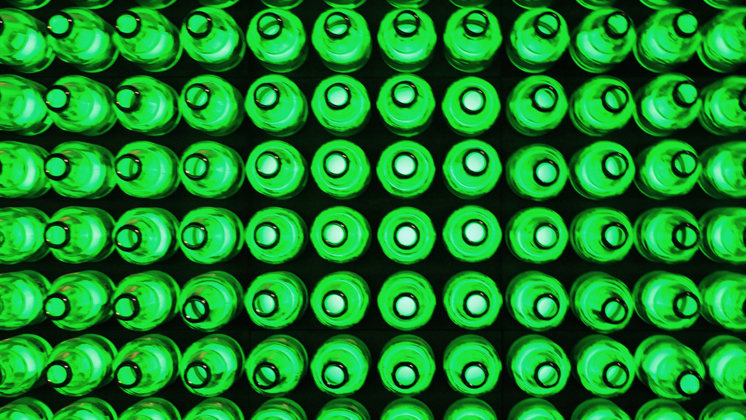 The next time you’re sipping an ice-cold Heineken out of its standard cylindrical bottle, take a moment to reminisce. These bottles used to be square and served more of a purpose than simply acting as a vessel for your brew.

Heineken bottles started out in the shape you recognize today. However, in 1960, Alfred Heineken — who was the grandson of Heineken’s founder, Gerard Adriaan Heineken — took a trip to the Caribbean island of Curacao and had a revelation. He realized he could barely walk a few steps without seeing littered Heineken bottles.

Alfred was deeply concerned by the vast amount of waste that his product was creating, and Curacao didn’t have the infrastructure to recycle the bottles for reuse. Moreover, he acknowledged that along with the issue of litter, the island’s impoverished communities were lacking in proper building materials.

So Alfred began brainstorming, eventually coming up with a solution that would kill two birds with one stone. Thus, the square beer bottle was born: Or, in Alfred’s eyes, a brick that would hold beer.

?: Freddy Heineken, Dutch Billionaire & bubbButgrandson of the founder of Heineken, visited the Caribbean in the early 60s & saw littered bottles. He went back home to invent square bottles that could be used after content consumption to build houses in impoverished countries. pic.twitter.com/NDKkpul1ba

With the help of architect John Habraken, Alfred designed the square-shaped Heineken World Bottle — also known as the WOBO. The WOBO would serve as both a container for beer and a brick (after the contents were consumed, of course). According to Smithsonian, the long side of the rectangular Heineken bottles had interlocking grooved surfaces, so when they were laid on their side, they would be easily stackable with mortar or cement.

To put things into perspective, it would take a thousand of Alfred’s square bottles to build a 10-foot-by-10-foot shack.

The WOBO became one of the first eco-conscious designs, having such a productive secondary use. But though thousands of WOBO bottles were made, the brick design idea in general never took off.

According to Adweek, as of 2012, almost all of the square Heineken bottles have been lost or destroyed. Just two actual WOBO structures still exist. There just weren’t many people who liked the idea of living in a beer bottle house. (And people at the Heineken brewery weren’t huge fans of Alfred’s idea either.)

However, if you’re intrigued by the square Heineken bottle you can see Alfred’s prototype glass buildings at the company’s former brewery-turned-museum, The Heineken Experience.