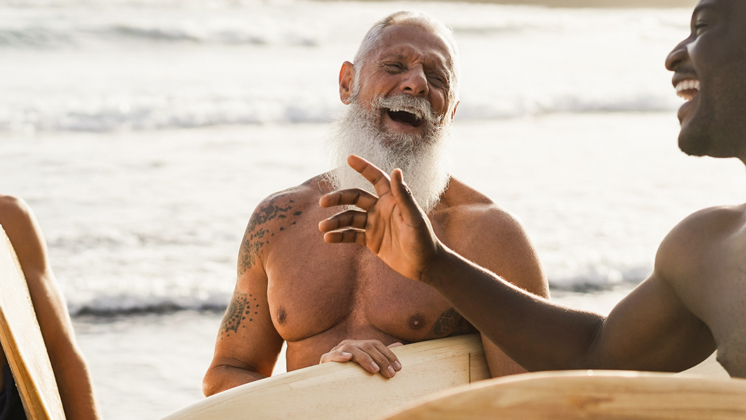 What is it about turning 60 that’s feels so different from all other ages? “It’s a time of major transition,” says Damon Raskin, M.D., a gerontologist and anti-aging specialist. ”It’s a time when things often start falling apart, both physically and emotionally.”

But there’s also good news. If you use your 50s to prepare for the big 6-0, you’ll make the transition much more easily. Better news, if you’re already over 60, embracing these activities will only make your life better. Granted, it’ll take some effort on your part, but the pay-off will be huge.

Yes, your peer group can be a great source of comfort (so don’t ditch them), but it’s also easy to sit around and just kvetch. “Younger friends,” said author Elizabeth Crook of Nashville, TN, “can be a source of fresh ideas and enthusiasm for you. Even better, you’ll be a source of inspiration and hope for them.”

“It’s never too late to stop smoking, lose weight, start exercising,” says Raskin, ”and the benefits will be tangible: less stress, more energy, mitigated health problems — and an end to beating yourself up for not being more disciplined.”

Even if it means working. Inactivity — both physical and mental — is a big no-no for healthy aging. Don’t just retire and hope for the best. Plan now what you want to do when you quit what you’ve always done. For Joan Moran, reaching 59 while at a writing job that was winding down, led her to worry about impending inertia. What to do next? A yoga practitioner, she decided to take a yoga instructors’ course.

4. Forgive those who’ve wronged you

And ask forgiveness from those you’ve wronged. As the old saying goes, “Resentment is like drinking poison and hoping the other person dies.” Few things consume as much negative emotional energy as a grudge. Decide to be grudge-free by the time you’re 60. (Start now!) Vow to make things right with others. Give yourself the gift of peace.

There’s no time like your 50s to make sure the people who help you — your physician, your lawyer, your CPA, your minister/rabbi, your banker — are the ones you trust to give sound advice about your well-being. If you’ve been working with people who are ho-hum, use the time now to research and cultivate a support team. Make sure you’re in good hands. Life will be infinitely easier when you have tough decisions to make.

At 50, Dan Hurley, a business exec in California, saw a flyer for the California Coast Classic, a 525-mile bike ride benefiting the Arthritis Foundation. “I’d loved biking as a kid,“ he says, “but this was way beyond my current ability as a weekend family bicyclist. Plus, I didn’t have any real connection to arthritis.” Still, something compelled him to sign up and start training, and get into great shape.

Maybe you weren’t born a natural optimist, but now’s a good time to start practicing what optimists do instinctively: Look for solutions to challenges, persist even when things don’t go well, understand the power of gratitude, take control of life rather than merely react to it. Seek people who exude these characteristics and emulate their actions. Read The Power of Optimism by Alan Loy McGinnis.

8. Explore activities you can do by yourself

Start birdwatching (and teach yourself what you need to look for), create your own film club (and watch every Jack Nicholson film, for example), or learn everything about gardening in your area and plan and plant a great garden. ”You need to enjoy your own company,” says Crook, “since it’s the only company you can really count on. It’s okay to talk, laugh, and sing to yourself — and by yourself.”

Don’t wait until you’re 60 or older to think about financing a Himalayan trek or taking the family on a special cruise. Create a savings plan now that will get you that much closer to emptying the bucket.

10. Make changes that matter to you

Something bug you? Change it. Craig Wolf, owner of Celebriducks (rubber duckies that look like famous people), was totally bothered by the fact that, though yellow rubber ducks had been invented and originally manufactured in America, they were now made in China. In his mid-50s, after several years of manufacturing his Celebriducks in China, he decided that outsourcing bothered him so much — emotionally and business-wise — that he needed to figure out a way to make his product in the USA.

His tenacity paid off: Celebriducks are now crafted in the U.S. True, this was a weighty financial decision, but making a difference at any level is always possible — and always needed.

The secret to life is just three words, according to Alan Alda

The year when 60 suddenly became ‘old’

10 apps everyone over 50 should have on their phone